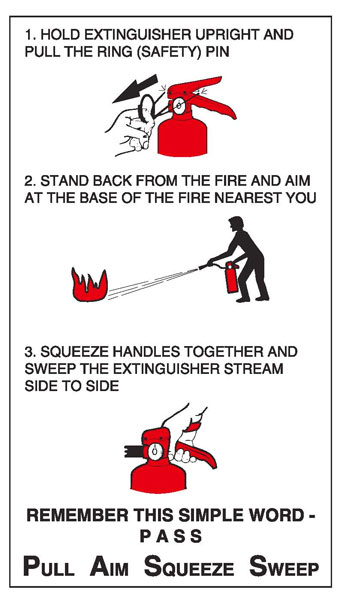 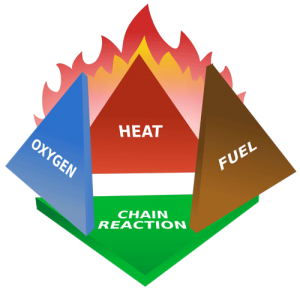 The fire triangle or combustion triangle is a simple model for understanding the ingredients necessary for most fires.

The triangle illustrates a fire requires three elements: heat, fuel, and an oxidizing agent (usually oxygen). The fire is prevented or extinguished by removing any one of them. A fire naturally occurs when the elements are combined in the right mixture.

The fire tetrahedron is an addition to the fire triangle. It adds the requirement for the presence of the chemical reaction which is the process of fire. For example, the suppression effect of Halon is due to its interference in the fire chemical inhibition. 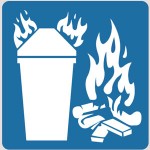 Class “A” fires can involve any material that has a burning ember or leaves an ash such as wood, paper, cloth, rubber, many plastics, etc. 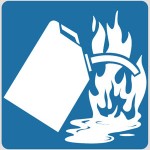 Class “B” fires involve flammable liquids and gases such as motor oil, paint thinner, dry cleaning agents, gasoline, propane, natural gas, etc. Flammable liquids do not ignite in the liquid state but rather it is the vapors being generated by these liquids that ignite. 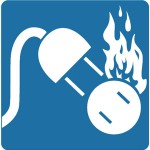 Class “C” fires involve live electrical equipment and require the use of an extinguishing agent and/or extinguisher that will not conduct electricity. 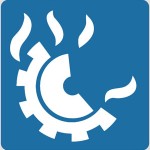 Class “D” fires involve exotic metals such as sodium, magnesium, and titanium. These fires require specials agents and special application techniques different from agents and techniques used on Class “A”, “B”, or “C” fires. Some agents like water will actually react to burning metals and increase the intensity of the fire in a violent manner.

Class “K” fires involve combustible cooking media such as vegetable or animal oils and fats. These fires require wet chemical extinguishers that have superior cooling capabilities to lower the temperature of the cooking medium below its auto ignition point.